Home>Church Books>Anatomy of a Revived Church: Seven Findings of How Congregations Avoided Death 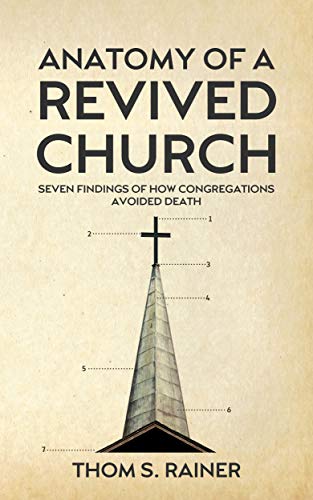 There is hope. God can save your church.

Thom Rainer reveals seven findings of revived churches. Through new research, he figuratively dissects hundreds of churches that were on the path toward death. But they turned around. They revived. They did so in the face of facts and naysayers who told them it could not be done.

Get ready to walk with us through the anatomy of churches that were revived because they chose to live. The choice is as simple as it is profound. Change or die. And now, in God’s power, the choice is yours.

Thom S. Rainer is the founder and CEO of Church Answers. Prior to Church Answers, he served as president and CEO of LifeWay Christian Resources. He also served at The Southern Baptist Theological Seminary for twelve years where he was the founding dean of the Billy Graham School of Missions and Evangelism. He has been a pastor of four churches and interim pastor of ten churches. He is a 1977 graduate of the University of Alabama and earned his Master of Divinity and Ph.D. degrees from The Southern Baptist Theological Seminary.

Rainer has written over 30 books, including three that reached number one bestseller: I Am a Church Member, Autopsy of a Deceased Church, and Simple Church.

He has spoken in hundreds of venues and led over 500 church consultations. He can be reached at www.ChurchAnswers.com.

Rainer and his wife, Nellie Jo, live in Franklin, TN, and have three grown sons: Sam, Art and Jess, who are married to Erin, Sarah and Rachel respectively. The Rainers have ten grandchildren: Canon, Maggie, Nathaniel, Will (with the Lord), Harper, Bren, Joshua, Collins, Joel, and James.