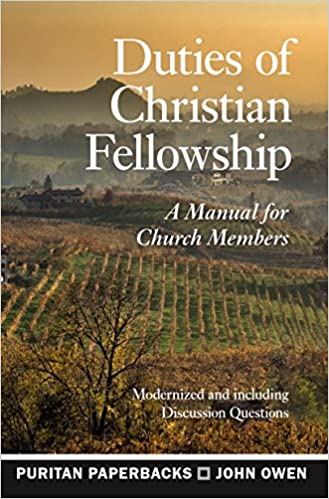 Duties of Christian Fellowship deals with a matter of perennial concern for every truly Christian church. In just a few pages it sets out in very concise terms the responsibilities all Christians have, first, to their pastors, and then second, to one another within the fellowship of the local church.

John Owen was a pastor as well as a theologian and therefore this is a most practical manual of church fellowship. It was likely intended to be read by individuals with self-examination, meditation and prayer, but it would also be very suitable for group Bible study or adult Sunday School classes. This edition is enhanced by a modernized text and the addition of questions which have been added to facilitate group discussion.

John Owen was born in 1616 in Stadhampton, Oxfordshire and died in Ealing, West London, in 1683. During his sixty-seven years he lived out a life full of spiritual experience, literary accomplishment, and national influence so beyond most of his peers that he continues to merit the accolade of ‘the greatest British theologian of all time.’

Despite his other achievements, Owen is best famed for his writings. These cover the range of doctrinal, ecclesiastical and practical subjects. They are characterized by profundity, thoroughness and, consequently, authority. Andrew Thomson said that Owen ‘makes you feel when he has reached the end of his subject, that he has also exhausted it.’ Although many of his works were called forth by the particular needs of his own day they all have a uniform quality of timelessness. The Banner of Truth Trust has reprinted his Works in twenty-three volumes.