Home>Leadership Books>Healing the Heart of Democracy: The Courage to Create a Politics Worthy of the Human Spirit 1st Edition, Kindle Edition 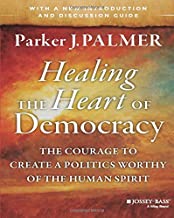 In Healing the Heart of Democracy, Parker J. Palmer quickens our instinct to seek the common good and gives us the tools to do it. This timely, courageous and practical work—intensely personal as well as political—is not about them, “those people” in Washington D.C., or in our state capitals, on whom we blame our political problems. It’s about us, “We the People,” and what we can do in everyday settings like families, neighborhoods, classrooms, congregations and workplaces to resist divide-and-conquer politics and restore a government “of the people, by the people, for the people.”

In the same compelling, inspiring prose that has made him a bestselling author, Palmer explores five “habits of the heart” that can help us restore democracy’s foundations as we nurture them in ourselves and each other:

Healing the Heart of Democracy is an eloquent and empowering call for “We the People” to reclaim our democracy. The online journal Democracy & Education called it “one of the most important books of the early 21st Century.” And Publishers Weekly, in a Starred Review, said “This beautifully written book deserves a wide audience that will benefit from discussing it.”

“He bravely takes on the current political climate, and this book provides therapy for the American body politic. His insights are heart-deep: America gains by living with tension and differences; we can help reclaim public life by actions as simple as walking down the street instead of driving. Hope’s hardly cheap, but history is made up of what Palmer calls ‘a million invisible acts of courage and the incremental gains that came with them.’ This beautifully written book deserves a wide audience that will benefit from discussing it.” —(A “Starred Review” from Publishers Weekly, 8 August 2011)

“Healing the Heart of Democracy is a hopeful book that lifts up and hallows the heart as a source of inner sight. Inspired by the efforts to understand and undergird democracy by Abraham Lincoln, Alexis de Tocqueville, Rosa Parks, and others; the author sends us on our way rejoicing with the small portion of hope that he has planted in our minds and souls.” —(Spirituality & Practice)

“There is a deep and disturbing cloud hanging over the United States. It is a malaise that is leading to cynicism and self-centeredness. The antidote is to be found in the healing of the heart of our democracy, so that we might emerge from this private focus to a public one, which recognizes our interdependence.  I know of no better guide to discerning the problem and the solutions, than this book by Parker Palmer. It is a prophetic book, one that needs to be taken with all due seriousness, if we are to emerge from our malaise stronger and healthier than before.” —(Englewood Review of Books , 2011)

* NEWS FLASH * Healing the Heart of Democracy called “one of the most important books of the early 21st Century” for those who care about democracy. (Democracy & Education)

* NEWS FLASH * Healing the Heart of Democracy named one of the “Best Books of 2011” on contemplation and social activism. (Spirituality & Practice)

* NEWS FLASH * Parker J. Palmer named one of “25 Visionaries Who Are Changing Your World” — people who “don’t just think out loud but who walk their talk on a daily basis.” (The Utne Reader)

* A Starred Review from Publishers Weekly * Palmer’s…newest was six years in the making. He bravely takes on the current political climate, with its atrophy of citizen participation, the ascendance of an oligarchy that shapes politics, and the substitution of vituperation for thoughtful public discussion. It’s a tall order that became even taller because Palmer had to climb out of a pit of depression — his constitutional proclivity — to do so. But wrestling with essential questions of public life became therapeutic, and this book provides therapy for the American body politic. Palmer’s use of acute 19th-century observers of American life and character — Tocqueville, Lincoln — as well as his use of anecdotes and lessons from his own long career provide context and tonic. His insights are heart-deep: America gains by living with tension and differences; we can help reclaim public life by actions as simple as walking down the street instead of driving. Hope’s hardly cheap, but history is made up of what Palmer calls “a million invisible acts of courage and the incremental gains that came with them.” This beautifully written book deserves a wide audience that will benefit from discussing it. — August 8, 2011

* We have been trying to bridge the great divides in this great country for a long time. In this book, Parker J. Palmer urges us to “keep on walking, keep on talking”–just as we did in the civil rights movement–until we cross those bridges together. — U.S. Congressman John Lewis, recipient of the Martin Luther King Jr. Nonviolent Peace Prize and the Presidential Medal of Freedom

* The book we need for recovering the heart, the very core, of our selves and our democracy. — Krista Tippett, host of public radio’s On Being and recipient of a 2013 National Humanities Medal

* A master work by a master, a clear and uplifting resource that keeps shining light in all the dark places. Palmer is that rare, deep seer who is at home in the streets, a teacher by example who has the courage to stand openly and honestly in the public square. — Mark Nepo, author of The Book of Awakening and As Far As the Heart Can See

* Can we keep our sights on the vision of what we aspire to be while working constructively to transform realities that do not yet fulfill that vision? How do we remain “open hearted” so that we can engage creatively with citizens who hold different views of the challenges we face?Healing the Heart of Democracy asks these necessary questions and inspires us to answer. — Joan Blades, co-founder of MoveOn.org and Living Room Conversations

* A book born for this moment. Wise, evocative, and pragmatic at its core, this dream for a new politics is grounded in dignity and liberty for all. — Terry Tempest Williams, author of The Open Space of Democracy

* In this inspiring book, I find encouragement that all of us, citizens and elected officials alike, can learn to bridge the divides that keep us from genuinely respecting one another. By sharing his own life’s struggles, Palmer reveals the common struggles we all endure. He provides us with a way forward, a way forward with hope. — U.S. Senator Tammy Baldwin

* A gracefully written anthem to democracy [that] breaks new ground in marrying the capacity of the human heart with the tensions inherent in politics [and] breathes new life into what it means to be a citizen–accountable, compassionate, fiercely realistic. — Peter Block and John McKnight, coauthors of The Abundant Community

* A “must read” for everyone who is concerned about the state of our democracy and has ever despaired about what can be done. Palmer’s stories, plainspoken analysis, and penetrating insights will inspire you to claim your full human capacities and to take part in healing democracy “from the inside out.” — Martha L. McCoy, Executive Director, Everyday Democracy

* The most important manifesto in generations for breaking through the divisiveness that has paralyzed our democracy. — Bill Shore, founder of Share Our Strength, author of The Imaginations of Unreasonable Men

* All who harbor concerns about American politics will find in this book a wise and kindred spirit who reminds us of choices we can make to help “reweave the tattered fabric of our civic life.” You will close this book appreciating how much you can do, and how much depends on you. — Diana Chapman Walsh, President Emerita of Wellesley College

* A courageous work that is honest and true, human and humble, glitteringly intelligent and unabashedly hopeful. Palmer gives us constructive language, historical context and a practical vision for how we as individuals and communities can get to the real heart of the matter. — Carrie Newcomer, activist and singer-songwriter, The Geography of Light and Before and After

* Could not be more timely and needed. As one who has been guided through a time of personal reflection with Parker Palmer, I invite you to join in a journey through these chapters. — U.S. Congresswoman Lois Capps, grandmother, mother, nurse, and seeker after democracy

* A brave and visionary book. Palmer re-imagines our political lives as a deeply personal process within which all Americans–especially those of us inheriting this broken polity–have a chance to be heard, heal, and get on with the eternal work of perfecting this nation. — Courtney E. Martin, author of Do It Anyway: The New Generation of Activists

* Palmer has been our mentor as we’ve weathered the rough and tumble of political life. In this compelling new book, he challenges us to recognize that a more vital democracy begins within each of us, as we learn to hold the tensions inherent in community life and no longer fear to tread that most difficult terrain–the broken places in our own hearts. — Kathy Gille served for twenty years as a senior congressional aide. — Doug Tanner, her husband, is a founder and former president of The Faith and Politics Institute.

* A book that should be read and talked about in every family, book club, classroom, boardroom, congregation and hall of government in our country. Palmer writes with clarity, good sense, balance, honesty, humor and humility, focusing on the essence of what is needed from each of us for the survival of our democracy. — Thomas F. Beech, President Emeritus, the Fetzer Institute