Home>Articles>INFORMATIVE ARTICLE: Integrity and the Bible 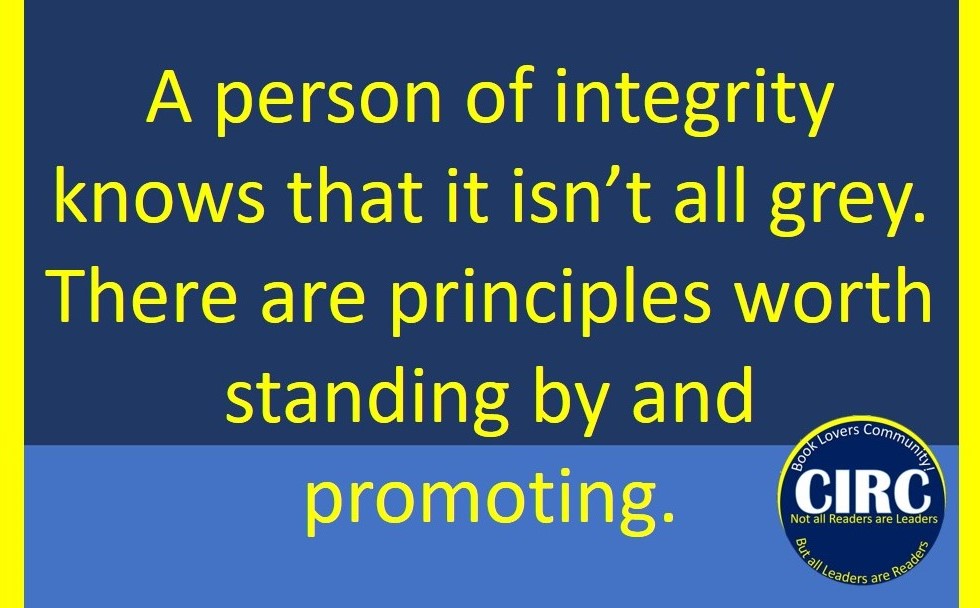 The subject of this article is the concept of integrity–a character quality that we often talk about but don’t see quite as regularly in the lives of public officials or even in the lives of the people we live and work with.

The word integrity comes from the same Latin root as integer and implies a wholeness of person. Just as we would talk about a whole number, so also we can talk about a whole person who is undivided. A person of integrity is living rightly, not divided, nor being a different person in different circumstances. A person of integrity is the same person in private that he or she is in public.

In the Sermon on the Mount, Jesus talked about those who were “pure in heart” (Matt. 5:8), implying an undividedness in following God’s commands. Integrity, therefore, not only implies an undividedness, but a moral purity as well.

The Bible is full of references to integrity, character, and moral purity. Consider just a few Old Testament references to integrity. In 1 Kings 9:4, God instructs Solomon to walk with “integrity of heart and uprightness” as his father did. David says in 1 Chronicles 29:17, “I know, my God, that you test the heart and are pleased with integrity.” And in Psalm 78:70-72 we read that “David shepherded them with integrity of heart, with skillful hands.”

The book of Proverbs provides an abundance of verses on integrity. Proverbs 10:9 says that, “He who walks in integrity walks securely, But he who perverts his ways will be found out.” A person of integrity will have a good reputation and not have to fear that he or she will be exposed or found out. Integrity provides a safe path through life.

Proverbs 11:3 says, “The integrity of the upright will guide them, But the falseness of the treacherous will destroy them.” Proverbs is a book of wisdom. The wise man or woman will live a life of integrity, which is a part of wisdom. Those who follow corruption or falsehood will be destroyed by the decisions and actions of their lives.

Proverbs 20:7 says, “A righteous man who walks in his integrity; How blessed are his sons after him.” Integrity leaves a legacy. A righteous man or woman walks in integrity and provides a path for his or her children to follow.

All of these verses imply a sense of duty and a recognition that we must have a level of discernment of God’s will in our lives. That would certainly require that people of integrity be students of the Word, and then diligently seek to apply God’s Word to their lives. The book of James admonishes us to be “doers of the word, and not merely hearers who delude themselves” (James 1:22). That is my goal in this article as we talk about integrity.

As we examine integrity, I would like to talk about its opposite: corruption. We claim to be a nation that demands integrity, but do we really? We say we want politicians to be honest, but really don’t expect them to be; perhaps because often we aren’t as honest as we should be. We say that we are a nation of laws, but often we break some of those same laws–like speed limits and jaywalking– and try to justify our actions.

A powerful illustration can be found in the book, The Day America Told the Truth, by James Patterson and Peter Kim.{1} Using a survey technique that guaranteed the privacy and anonymity of the respondents, they were able to document what Americans really believe and do. The results were startling.

First, they found there was no moral authority in America. “Americans are making up their own moral codes. Only 13 percent of us believe in all the Ten Commandments. Forty percent of us believe in five of the Ten Commandments. We choose which laws of God we believe in. There is absolutely no moral consensus in this country as there was in the 1950s, when all our institutions commanded more respect.”

Second, they found Americans are not honest. “Lying has become an integral part of American culture, a trait of the American character. We lie and don’t even think about it. We lie for no reason.” The authors estimate that 91 percent of us lie regularly.

Third, marriage and family are no longer sacred institutions. “While we still marry, we have lost faith in the institution of marriage. A third of married men and women confessed to us that they’ve had at least one affair. Thirty percent aren’t really sure that they still love their spouse.”

Fourth, they found that the “Protestant [work] ethic is long gone from today’s American workplace. Workers around America frankly admit that they spend more than 20 percent (7 hours a week) of their time at work totally goofing off. That amounts to a four-day work week across the nation.”

The authors conclude by suggesting that we have a new set of commandments for America:I don’t see the point in observing the Sabbath (77 percent).I will steal from those who won’t really miss it (74 percent).I will lie when it suits me, so long as it doesn’t cause any real damage (64 percent).I will cheat on my spouse; after all, given the chance, he or she will do the same (53 percent).I will procrastinate at work and do absolutely nothing about one full day in every five (50 percent).

We may say that we are a nation that wants integrity, but apparently a majority of us lack it in our own personal lives.

The Traits of Integrity

Honesty I would now like to turn our focus toward four key traits found in a person of integrity. One of those traits is honesty.

We talked about some of the findings from the book The Day America Told the Truth. The authors found that nearly everyone in America lies and does so on a fairly regular basis. Truth telling apparently is no longer a virtue people try to adopt for their lives. We may say we want people to tell the truth, but we don’t do it ourselves.

It’s a little like the story of the man who sent a letter to the Internal Revenue Service. He said, “I cheated on my income taxes, and felt so bad that I couldn’t sleep. Enclosed find a check for $150. And if I still can’t sleep I’ll send the rest of what I owe.”

Many of us can relate to that man. We want to be honest, but sometimes we find it easier to be dishonest. So we try to find a way to compromise our values so that a little bit of lying doesn’t bother our conscience.

In Tom Clancy’s novel, Clear and Present Danger, Jack Ryan is about the only noble character in the book. As he begins to uncover this clandestine government plot, he is confronted by the antagonist who makes fun of Jack Ryan’s principles. He says, “You’re a boy scout, Jack. Don’t you get it? It’s all grey. It’s all grey.”

I wonder how often people of integrity hear a similar statement in corporate board rooms or the halls of government. It’s all grey. There are no absolute right and wrong values. It’s all relative.

A person of integrity knows that it isn’t all grey. There are principles worth standing by and promoting. There are values that should govern our lives. We have a responsibility to follow God’s law rather than the crowd.

When the book of Proverbs talks of the “integrity of the upright” it implies that we adhere to God’s will and God’s laws. We have a duty to obey God’s absolute commands in our lives and become men and women of integrity.

There is a popular book on the market entitled, Who You Are When Nobody’s Looking. Who are you when nobody’s looking? Will I see the same person that I see when you are in a group of people? Do you do the right thing no matter what the circumstances?

There was a newspaper story years ago about a man in Long Beach who went into a KFC to get some chicken for himself and the young lady with him. She waited in the car while he went in to pick up the chicken. Inadvertently the manager of the store handed the guy the box in which he had placed the financial proceeds of the day instead of the box of chicken. You see, he was going to make a deposit and had camouflaged it by putting the money in a fried chicken box.

The fellow took his box, went back to the car, and the two of them drove away. When they got to the park and opened the box, they discovered they had a box full of money. Now that was a very vulnerable moment for the average individual. However, realizing the mistake, he got back into the car and returned to the place and gave the money back to the manager. Well, the manager was elated! He was so pleased that he told the young man, “Stick around, I want to call the newspaper and have them take your picture. You’re the most honest guy in town.

“Why not?” asked the manager.

Apparently he had not considered the consequences of his actions. Even when he was doing something right, it turned out he was also doing something wrong. A person of integrity is integrated and authentic. There is no duplicity of attitudes and actions.

When the apostle Paul lists the qualifications for an elder in the church, he says “he must have a good reputation with those outside the church, so that he may not fall into reproach and the snare of the devil” (1 Tim. 3:7). This is not only a desirable quality for church elders, it is a quality we should all aspire to. Christians should be “above reproach” in their public testimony before the watching world.

In the next section, we will talk more about the importance of public testimony of integrity and conclude our study…CONTINUE READING…@ https://probe.org

If you are NEW HERE, please check out our about-circ-blog/ page and read to know a little more about CIRC BLOG Or Click here for recent posts.

If you are interested in submitting soul-nurturing articles or books for all of us to benefit from, please contact CIRC BLOG Admin via  circ.community@emoltem.com

Are you willing to share with us how we can improve or having a problem on the site or a post, please contact CIRC BLOG Admin via  circ.community@emoltem.com

Would you like to give OR re-dedicate your life to JESUS CHRIST, but you don’t know HOW?

Please READOUT LOUD below Prayer and contact us @ circ.community@emoltem.com for more information.