Home>Hope Books>It’s Not That Bad: (But How Bad Is Your Story?) 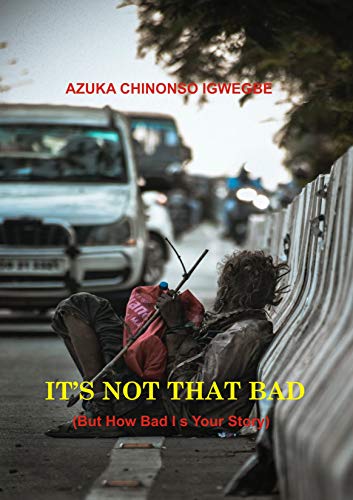 Wounded and broken? I understand how you feel right now but the good news is that your brokenness is not that bad; if only you will give God the pieces of your broken heart you will be surprised how he will amend it.

I write to tell you that you have not committed the unpardonable sin in the calendar of life as far as Jesus is concern. Thinking that you have done the worst? Never worry; if only you have heard the atrocity the man at the other street committed, but he did not see suicide as a permanent solution to his mess.

Did you just whisper to my ear, “Oh, if only you hear my story, the atrocity and the shameful thing I did, each time I remember it I feel like killing myself” Really? And you think committing suicide will end the shame? No, it will take you to hell.

Dear friend, I’m interested in your story, but it seems you don’t want to share it with anybody because it’s too shameful to talk about. Guess what! There was a lady whose sex video was leaked by her friends just to ruin her career. The video went viral on the internet. People were expecting the lady to commit suicide the following day but she never did. Six months later everybody forgot about the story. Today nobody talks about the girl or the video anymore. What if she had committed suicide, she should be in hell by now regretting his decision.

Sometimes it seems that people are trying to legalize suicide; any small mistake or situation they will kill themselves. Hear me, no story, no mess, no atrocity worth suicide if only you can give that case at least six months you will see that everybody will forget about it. Stop thinking of what people, friends, and family will say. If they like let them say their worst; in fact, they will not say more than the Pharisee said when they caught a woman in adultery (John 8)

Who is he that condemns you when Christ who supposed to condemn you does not? You have not done anything bad that worth suicide; your story is not yet that bad to think of killing yourself. Tell me your story and I will tell you what the man at the end of the street did but he did not kill himself despite how ugly and shameful the story sound. Six months after his shameful act nobody talked about it anymore. Excuse me, we are in a very busy world where nobody has time to be talking about people’s stories all the time; no matter how bad one’s story may sound, after few months people will forget about it.

But if you think that your story is bad, then how bad is it? Read more @ https://www.amazon.com/