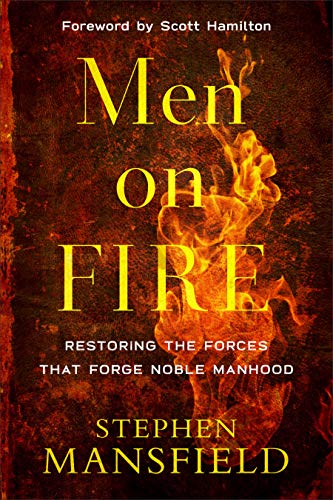 Men are in crisis. From every direction, they are presented with a deformed masculinity. One that sees women as conquests rather than partners. One that values success at work over success at home. One that hinders true and open friendships with other men who hold them up and hold them accountable. One that presents them as either the bumbling, disconnected dad in sitcoms or the predator in movies and video games (and the news). Men were made for more than this. It’s time to rekindle the fire living inside of them and awaken them to the value of valiant, righteous manhood.

Through inspiring stories and hard-hitting biblical truths, Stephen Mansfield uncovers the seven fires that ought to burn in a man’s soul–the fires of destiny, heritage, friendship, love, battle, legacy, and God. This raw guide to the restoration of a noble, honorable manhood will challenge men of every generation to live well, invest in others, and leave a powerful legacy.

Stephen Mansfield is the New York Times bestselling author of The Faith of George W. Bush, The Faith of Barack Obama, Lincoln’s Battle with God, and The Character and Greatness of Winston Churchill, among others. Founder of The Mansfield Group, a media training firm, he is also an in-demand speaker and consultant. He holds a doctorate in history and literature and makes his home in Nashville, Tennessee, and Washington, DC, with his wife, Beverly.

Stephen Mansfield is a New York Times bestselling author and a popular speaker who also leads a media training firm based in Washington, DC.

He first rose to global attention with his groundbreaking book “The Faith of George W. Bush,” a bestseller that Time magazine credited with helping to shape the 2004 US presidential election. The book was a source for Oliver Stone’s award-winning film “W.” Mansfield’s “The Faith of Barack Obama” was another international bestseller. He has written celebrated biographies of Booker T. Washington, George Whitefield, Winston Churchill, Pope Benedict XVI, and Abraham Lincoln, among others. Publishers Weekly described his book, “Killing Jesus,” as “masterful.”

Stephen’s humorous but fiery “Mansfield’s Book of Manly Men” has inspired men’s events in the US and abroad. His more recent “The Miracle of the Kurds” has been selected as “Book of the Year” by Rudaw, the leading Kurdish news service. As a result of this book, Mansfield has become a respected voice in support of the Kurds against the evils of ISIS in the Middle East.

Stephen speaks widely about men, leadership, faith, the lessons of history, and the forces that shape modern culture. His media training firm, The Mansfield Group, has worked with top politicians, CEOs, rock stars, major publishing firms, and educational institutions around the world.

Mansfield lives in Nashville and the nation’s capital with his wife Beverly, an award-winning songwriter and producer.