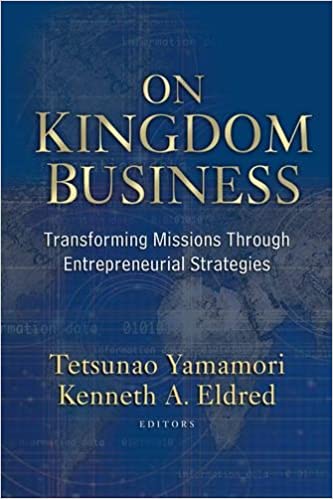 More than one quarter of the world’s people have little or no opportunity to hear the gospel. While few of the unreached care to investigate the claims of Christ, they are concerned about their own economic advancement.

“Probably nowhere can you find the range of actual examples and keen insights offered by the spectrum of contributors to this landmark book. We are deeply indebted to both the contributors and the editors for so stout and comprehensive a set of documents, on so crucial and yet baffling a challenge.”
—Ralph D. Winter, President, William Carey International University

“Business is not a necessary evil or a cover for the ‘real work’ of missions but a way to create investments, jobs, economic vitality, and a hearing for a credible gospel. It is hard work, but these pages are filled with the examples and learnings of extraordinary men and women-evangelistic entrepreneurs.”
—Fred Smith, President, The Gathering

Mr. Eldred has founded numerous successful companies, including Ariba Technologies, Inc. (NASDAQ: ARBA), the leader in the Internet business-to-business industry, and Inmac, which went public in 1987 and later merged with Micro Warehouse. He was named Silicon Valley “Entrepreneur of the Year” in 1988. Internationally, Mr. Eldred is co-founder and director of Epicenter Technologies, a 1,000-person call center business based in India. He has also founded other ventures in Europe and China.

Currently, Mr. Eldred is an investor and founder/CEO of Living Stones Foundation Charitable Trust, where he focuses his efforts primarily on charitable projects. He serves on the Board of Advisors for Crosspoint Venture Partners, named by Forbes as the most successful venture firm for three years in a row. Mr. Eldred is also chairman of Parakletos Venture Capital. He is in much demand as a speaker and as an advisor to various business ventures.

Mr. Eldred is the author of God Is at Work: Transforming People and Nations Through Business (Regal Books, 2005; Manna, 2009), named the number one book in the field by the Business as Mission Network, and the co-editor of On Kingdom Business: Transforming Missions through Entrepreneurial Strategies (Crossway Books, 2003), winner of a 2004 Christianity Today Book Award. He has been profiled in Executive Influence by Christopher A. Crane and Mike Hamel (NavPress, 2003).