Home>Retirement Books>On the Brink of Everything: Grace, Gravity, and Getting Old 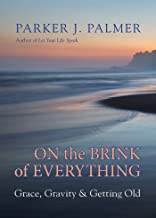 From beloved and bestselling author Parker J. Palmer comes a beautiful book of reflections on what we can learn as we move closer to “the brink of everything.”

Drawing on eight decades of life — and his career as a writer, teacher, and activist — Palmer explores the questions age raises and the promises it holds. “Old,” he writes, “is just another word for nothing left to lose, a time to dive deep into life, not withdraw to the shallows.”

But this book is not for elders only.

It was written to encourage adults of all ages to explore the way their lives are unfolding. It’s not a how-to-do-it book on aging, but a set of meditations in prose and poetry that turn the prism on the meaning(s) of one’s life, refracting new light at every turn.

From beginning to end, the book is laced with humor as well as gravitas — beautifully enhanced by three free downloadable songs from the gifted singer-songwriter Carrie Newcomer, written in response to themes in the book.

I. The View from the Brink: What I Can See from Here

II. Young & Old: The Dance of the Generations

III. Getting Real: From Illusion to Reality

V. Keep Reaching Out: Staying Engaged with the World

VI. Keep Reaching In: Staying Engaged with Your Soul

VII. Over the Edge: Where We Go When We Die

Parker Palmer is one of our wisest minds and lives and one of my greatest mentors. He has the spirit of a poet and the stature of a prophet. There is no one I’d rather eavesdrop on as he ponders “the brink of everything.” This book is a companion for not merely surviving a fractured world, but embodying — like Parker — the fiercely honest and gracious wholeness that is ours to claim at every stage of life. –KRISTA TIPPETT, founder of On Being Studios, author of Einstein’s God and Becoming Wise, winner of the 2014 National Humanities Medal

Our entire culture is deeply in need of true elders, and you can’t be one until you have arrived there — chronologically, spiritually, and intellectually. Parker J. Palmer is a writer and a man who has clearly earned the title of elder. And he elders with such readability and humor! This book is a generous gift to all of us–and to our attempts at a truly human civilization. –RICHARD ROHR, founder of the Center for Action and Contemplation, and author of Falling Upward and Adam’s Return

Parker J. Palmer’s tenth wise book, On the Brink of Everything, is a wondrously rich mix of reality and possibility, comfort and story, helpful counsel and poetry, in the voice of a friend. It’s an honest wake-up chime, no matter where you are in your own time-line, because somehow, these pages hold all of time — past and present, stirring together, refreshing the spirit. This is a book of immense gratitude, consolation, and praise. –NAOMI SHIHAB NYE, author of Transfer and Voices in the Air: Poems for Listeners, and National Book Award finalist

PARKER J. PALMER is a writer, teacher and activist whose work speaks deeply to people in many walks of life. He is founder and senior partner of the Center for Courage & Renewal. He holds a Ph.D. in sociology from the University of California at Berkeley, as well as thirteen honorary doctorates, two Distinguished Achievement Awards from the National Educational Press Association, and an Award of Excellence from the Associated Church Press. In 1998, the Leadership Project, a national survey of 10,000 educators, named him one of the thirty most influential senior leaders in higher education and one of the ten key agenda-setters of the past decade. In 2010, he was given the William Rainey Harper Award (previously won by Margaret Mead, Marshall McLuhan, Paulo Freire, and Elie Wiesel). “Living the Questions: Essays Inspired by the Work and Life of Parker J. Palmer,” was published in 2005. In 2011, the Utne Reader named him as one of “25 Visionaries Who Are Changing Your World”–people who “don’t just think out loud but who walk their talk on a daily basis.” (See the Oct-Nov 2011 print or online edition.) He lives in Madison, Wisconsin.