Home>Marriage Books>Playing Hurt: A Guy’s Strategy for a Winning Marriage 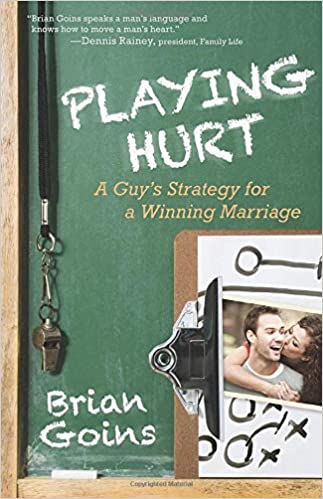 Everyone admires people who play hurt, from the superstar athlete to the journeyman player who finishes the game even when hurt, sick, or falling apart. Everyone looks up to these athletes and wants to mimic their “never give up” attitude. Except when it comes to marriage. Most husbands are willing to take a bullet for their wives in a life-and-death situation; but when his bride fires the bullet–hurls an insult, disrespects him in public, ignores his foreplay in private–he’d rather throw in the towel than play through the pain.

Playing Hurt is a biblical playbook for marriage that speaks in the language most men understand—the language of sports. Using a sports analogy to explain the motivation, means, and methods of playing hurt, author Brian Goins shows men how to overcome the temptation to stay on the bench. Playing Hurt is more about inspiration than instruction. It’s about finding the motivation to stay in the game, despite the pain. It’s about becoming like the One who knew more about nails and thorns than any superstar athlete. Using Ephesians 5 as a biblical basis, this book will call husbands to be the heros they long to be–men who play hurt in order to win at marriage.

Brian’s home base is in Charlotte, NC where he serves as lead pastor for Renaissance Bible Church. He enjoys traveling and speaking to couples at Family Life’s Weekend to Remember conferences with Jennifer, his bride and mother of their three children (Brantley, Palmer, and Gibson). He’s written numerous study guides, workbooks, and Bible studies that he has developed for Insight for Living and Walk Thru the Bible. –This text refers to an out of print or unavailable edition of this title.