Home>Parenting Books>Raising Boys, Third Edition: Why Boys Are Different–and How to Help Them Become Happy and Well-Balanced Men 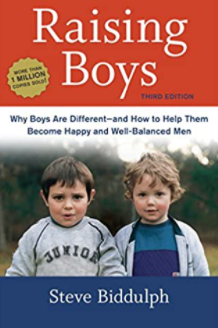 Raising a happy, loving, responsible boy in today’s world can be challenging. In this third edition of his international bestseller, Steve Biddulph looks at the most important issues in a boy’s development from birth to manhood. With gentle humor and proven wisdom backed by decades as a family psychologist and father, he shows parents how to provide the firm, loving guidance that boys need. Updates include information on mitigating the dangerous effects of online pornography, male-specific hearing problems, and teen driving on boys. Biddulph also discusses:
• The three stages of boyhood, and how to help them go smoothly.
• Testosterone! How it changes behavior and what to do about it.
• How boys’ brain development differs from girls’.
• How to help boys cultivate a caring attitude toward sex.
• The impact of competitive sports on boys, and how to ensure it stays positive.
• Questions to assist in finding boy-friendly schools.

Have you ever browsed through a family photo collection and seen photos of a boy taken over the course of many years, from babyhood through to young manhood? If you have, you’ll know that boys don’t grow up in a smooth way. They go in surges—looking the same for a year or two, then suddenly seeming to change overnight. And that’s only on the outside. On the inside, great changes are happening, too. But developing maturity and character aren’t as automatic as physical growing. A boy can get stuck. Everyone knows at least one man who is large in body but small in mind or soul. He just hasn’t developed as a mature person. Such men are everywhere—they might be rich, powerful, a president, or a tycoon, but you look at them and think, Yep, still a boy. And not a very nice one.
Boys don’t grow up well if you don’t help them. You can’t just shovel in cereal, provide clean T-shirts, and expect him to one day wake up as a man! You need to follow a certain program. The trick is to understand what is needed—and when.
Luckily, boys have been around for a very long time. Every society in the world has encountered the challenge of raising boys and has come up with solutions. The three stages of boyhood are timeless and universal. Native Americans, the San tribe of the Kalahari, Australian Aborigines—all knew about these stages. We know them from science—hormone studies and brain imaging. And from observation—whenever I talk about these stages with parents, they say, “That’s right!” because the stages match their experience. They just hadn’t thought about it before.

Here are the stages at a glance:
1. The first stage of boyhood is from birth to six—the span of time when the boy primarily belongs to his mother. He is “her” boy, even though his father may play a very big role, too. The aim at this age is to give strong love and security, and to “switch a boy on” to life as a warm and welcoming experience.

2. The second stage includes the years from six to
fourteen—when the boy, out of his own internal drives, starts wanting to learn to be a man, and looks more and more to his father for interest and activity. (Though his mother remains very involved, and the wider world is beckoning, too.) The purpose of this stage is to build competence and skill while developing kindness and playfulness, too—becoming a balanced person. This is the age when a boy becomes happy and secure about being male.

3. Finally, the years from fourteen to adult—when the boy needs input from male mentors if he is to complete the journey into being fully grown up. Mom and Dad step back a little, but they must organize some good mentors in their son’s life or he will have to rely on an ill-equipped peer group for his sense of self. The aim is for your son to learn skills, responsibility, and self-respect by joining more and more with the adult community.

Please note: These stages do not indicate a sudden or sharp shift from one parent to another.
It’s not like there’s the mom stage, then the dad stage, and then the mentor stage. For instance, an involved dad can do a huge amount from birth onward, or even take the role a mother usually has if need be. And a mother doesn’t quit when a boy reaches six. Quite the opposite. The stages indicate a shift of emphasis: that the father comes to the fore more from six through fourteen, and the importance of mentors increases from fourteen onward. In a sense, it’s about adding on the new ingredients at each stage.

The three stages help us know what to do. For example, it’s clear that fathers of boys from six to fourteen must not be busy workaholics or absent themselves emotionally or physically from the family. If they do, this will certainly damage their boys. (Yet most fathers of the twentieth century did just that—as many of us remember from our own childhoods.)
The stages tell us that we need to bring in extra help from the community when our sons are in their mid-teens—the role that family members (uncles and grandfathers) or the tradesman-apprentice relationship used to take. Too often, teenagers move outward into the big world but no one is there to catch them, and they spend their teens and early adulthood in a dangerous halfway stage with only peers to depend on.
It’s probable that many problems with boys’ behavior—poor school motivation, depression, and getting into strife with the law (drunk driving, fighting, crime, and so on)—develop because we haven’t known about these stages and haven’t provided the right human ingredients at the right times. The stages are so important that we must look at them in more detail and decide how to respond. That’s what we’ll do now.

STEVE BIDDULPH is one of the world’s best-known parenting authors, with books in four million homes and thirty-one languages. He was a family psychologist for more than thirty years, and teaches at The Cairnmillar Institute in Melbourne. He lives in Tasmania, Australia.