Home>Articles>INFORMATIVE ARTICLE: Whose Battle Is It: Yours or the Lord’s? 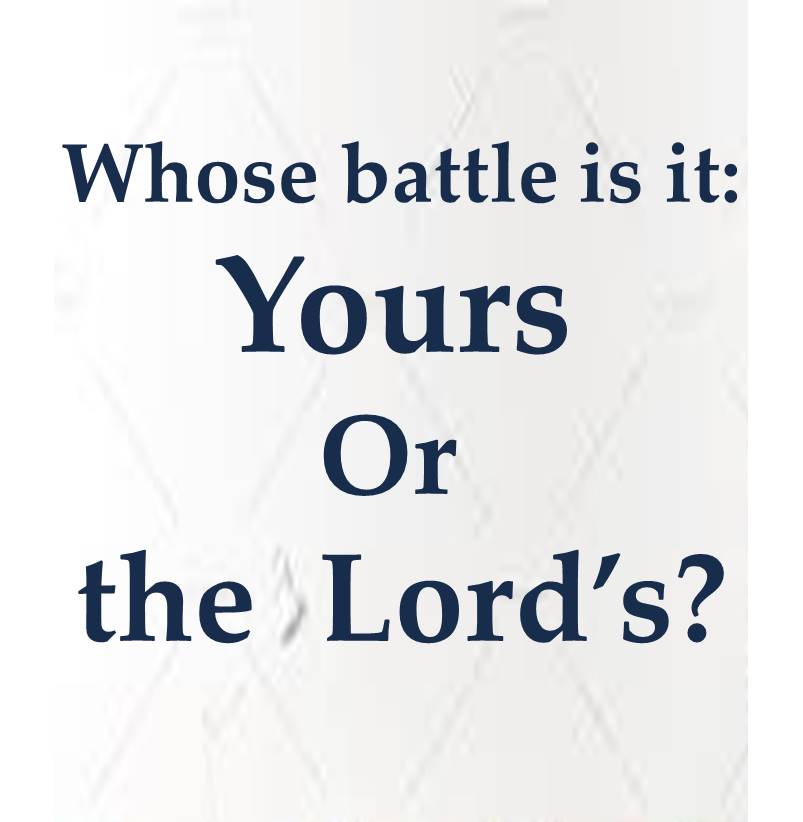 “Why is this happening to me?”

“I thought God was supposed to protect me?”

Many leaders in the Body of Christ declare that the battle is the Lord’s and that our job is just to believe and trust. Others contend that we are to be actively involved in fighting the enemy. What is the truth?

Christians face an ongoing challenge when applying Old Testament scriptures this side of the cross. Facts that were accepted and understood before Christ must be scrutinized through the prism of Christ’s victory on the cross.

Much changed there! The Holy Spirit now indwells us and does not merely rest upon us. Christ’s church has been given high authority and power here on earth, including healing the sick and driving out demons to list only a couple (Mark 16:17). His divine power has given all that we need to lead a godly and blessed life (2 Peter 1:3).

The warfare detailed in 2 Chronicles 20:1-29 sets the stage for Joshua’s famous declaration.

An alliance of Moab, Ammon, and others had invaded Judah. It was a matter of mathematics; the enemy by far outnumbered the people of Judah. There seemed to be only one possible outcome; the defeat of Judah.

Jumping up, Jehoshaphat stood in the temple and prayed. There was only one place to turn. Sometimes life is like that. And concerning death and eternity, God is the only One who can make a difference!

The Lord responded through His prophet, Jahaziel. “…and he said, “Listen, all Judah and the inhabitants of Jerusalem and King Jehoshaphat: thus says the LORD to you, “Do not fear or be dismayed because of this great multitude, for the battle is not yours but God’s.” (2 Chronicles 20:15).

Yes, here was a case where the battle had to be the Lord’s, or it would be lost.

However, that the battle was the Lord’s did not mean that the people of Judah were to sit and do nothing. They were instructed: “You need not fight in this battle; station yourselves, stand and see the salvation of the LORD on your behalf, O Judah and Jerusalem.’ Do not fear or be dismayed; tomorrow go out to face them, for the LORD is with you.” (2 Chronicles 20:17).

They went out and met their enemy, and the Lord gave them victory as they watched their opponent’s alliance fall apart and the former allies attack one another.

In the new testament, Jesus encouraged his disciples to have a sword to do battle. Consider the exchange with his disciples in Luke 22:35-38. It was the night of his betrayal, and he was preparing them for life without Him.

“Then Jesus asked them, “When I sent you without purse, bag or sandals, did you lack anything?” “Nothing,” they answered. He said to them, “But now if you have a purse, take it, and also a bag; and if you don’t have a sword, sell your cloak and buy one. It is written: ‘And he was numbered with the transgressors; and I tell you that this must be fulfilled in me. Yes, what is written about me is reaching its fulfillment.” The disciples said, “See, Lord, here are two swords.” “That’s enough!” he replied. (NIV)

The disciples were to sell their cloak if they did not have money enough for a sword. They needed to be ready for warfare in the natural. This was a new paradigm for them because they had seen Jesus provide for and protect them supernaturally.

While we do not need swords, we are under a new covenant, and the same directive applies to us. (Bonus question: what about guns and ammunition for believers today? That’s for another article.)

There are instructions in the new testament that clearly indicate that we have more spiritual weapons at our disposal than the people of Judah.

We will not address it here, but many intercessors engage in spiritual in the second heaven, battling spiritual forces of evil over principalities, countries, and cities.

What is the proper response for us?

I believe we need to focus on the preponderance of verses in the new testament and not get distracted by a single sentence in 2 Chronicles about the battle being the Lord’s.

God is for us (Romans 8:31) and works behind the scenes. Yes, He does do battle on our behalf, but we have a role to play also.

Rest in the Lord and Engage the Enemy

I have seen too many people who do not understand or believe the reality of spiritual warfare and are very willing to leave the battle to the Lord. They mistakenly believe that there is nothing they need to do. The people of Judah went out and faced the enemy. They stationed themselves and watched the victory unfold.

Many modern believers rail against the Lord when, in their view, they have been beaten up by Satan. They are angry because He appeared to abandon them and allowed calamity to unfold in their lives.

We are called to do more today against the demonic realm because we have been given more. We are to battle using the revelation, power, authority and weapons we possess and have inner strength and calm during the storms. We can take hold of this peace of God by trusting in him with all our heart (Isaiah 26:3??).

We must rest in the Lord but also do our part by engaging in spiritual warfare against the enemy of our souls. These directives are not mutually exclusive, and I believe they provide the road map to living the blessed and abundant life that Christ has purposed for us as we journey along the path that leads to eternal life (Matthew 7:14).