Home>Entrepreneur books>The Prosperity Paradox: How Innovation Can Lift Nations Out of Poverty 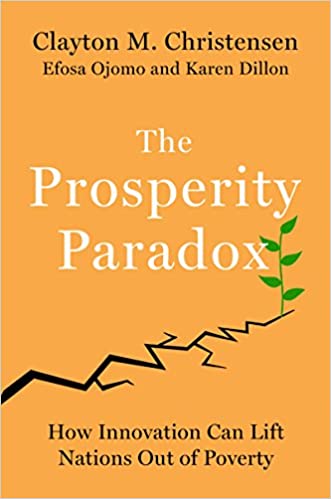 Global poverty is one of the world’s most vexing problems. For decades, we’ve assumed smart, well-intentioned people will eventually be able to change the economic trajectory of poor countries. From education to healthcare, infrastructure to eradicating corruption, too many solutions rely on trial and error. Essentially, the plan is often to identify areas that need help, flood them with resources, and hope to see change over time.

But hope is not an effective strategy.

Clayton M. Christensen and his co-authors reveal a paradox at the heart of our approach to solving poverty. While noble, our current solutions are not producing consistent results, and in some cases, have exacerbated the problem. At least twenty countries that have received billions of dollars’ worth of aid are poorer now.

Applying the rigorous and theory-driven analysis he is known for, Christensen suggests a better way. The right kind of innovation not only builds companies—but also builds countries. The Prosperity Paradox identifies the limits of common economic development models, which tend to be top-down efforts, and offers a new framework for economic growth based on entrepreneurship and market-creating innovation. Christensen, Ojomo, and Dillon use successful examples from America’s own economic development, including Ford, Eastman Kodak, and Singer Sewing Machines, and shows how similar models have worked in other regions such as Japan, South Korea, Nigeria, Rwanda, India, Argentina, and Mexico.

The ideas in this book will help companies desperate for real, long-term growth see actual, sustainable progress where they’ve failed before. But The Prosperity Paradox is more than a business book; it is a call to action for anyone who wants a fresh take for making the world a better and more prosperous place.

“Clayton Christensen’s latest book The Prosperity Paradox is a must-read. Powerful, persuasive, andwonderfully written, Christensen and his coauthors make a compelling case for the game-changing roleof innovation in some of the world’s most desperate economies.”- Eric Schmidt, Former Executive Chairman of Google and Alphabet

“The Prosperity Paradox has the power to transform our thinking about philanthropy and social good. Aswe continue to grapple with how to lift people out of poverty, Clay Christensen, Efosa Ojomo and KarenDillon provide a new and innovative solution for millions of people around the world. It’s a must-readfor anyone with an interest in global affairs who wants to create a truly thriving society.”- Arianna Huffington, Founder & CEO, Thrive Global

“The rise of any economy, local or global, must be fueled by innovative entrepreneurs willing to buildnew markets. With The Prosperity Paradox, Christensen, Ojomo, and Dillon offer powerful insight andguidance on how we can channel our efforts to create jobs, generate growth, and impact individual livesall over the world.”- Steve Case, Chairman & CEO of Revolution and co-founder of AOL

“The Prosperity Paradox is a manifesto and a call to action for those who recognize that our survivaldepends on creating opportunity. This book will help innovators be more compassionate. And thecompassionate be more innovative.”- Tom Fletcher, CMG, former UK Ambassador and author of The Naked Diplomat

Starving children on street corners. Slums without adequate clean water and sanitation. Hopeless prospects for employment amid a growing youth population. Most of us are moved by the painful signs of poverty we see in poor countries all around the world. Though some progress has been made, upwards of 750 million people still live in extreme poverty, surviving on less than $1.90 a day. We all want to help. But what might seem to be the most obvious solution to these problems—directly assisting poor countries by investing to fix these visible signs of poverty—has not been as successful as many of us would like. You only have to look at the billions of dollars that have been channeled to these problems over the years with relatively slow progress to conclude that something is not quite right. With these efforts, we may be easing poverty for some—but we’re not moving the needle enough long term.

What if we considered this problem through a different lens? What if, instead of trying to fix the visible signs of poverty, we focused instead on creating lasting prosperity? This may require a counterintuitive approach to economic development, but one that will cause you to see opportunities where you might least expect them. We wrote this book to celebrate the role innovation can play, even in the most difficult of circumstances, in creating and sustaining prosperity even in some of the most desperate parts of the world. By supporting and investing in market-creating innovations, we inadvertently engage in nation building.

CLAYTON M. CHRISTENSEN is the Kim B. Clark Professor at Harvard Business School, the author of 12 books, a five-time recipient of the McKinsey Award for Harvard Business Review‘s best article, and the cofounder of four companies, including the innovation consulting firm Innosight. He is repeatedly recognized by Thinkers50 as one of the most influential business thinkers in the world, who have noted that “his influence on the business world has been profound.”

EFOSA OJOMO works side-by-side with Christensen as a senior fellow at Christensen Institute for Disruptive Innovation, where he leads the organization’s Global Prosperity Practice. His work has been published in the Harvard Business Review, the Guardian, Quartz,CNBC Africa, and the Emerging Markets Business Review. He graduated with an MBA from Harvard Business School in 2015.

KAREN DILLON is the former editor of the Harvard Business Review and coauthor of the New York Times bestseller How Will You Measure Your Life? and Competing Against Luck. A graduate of Cornell University and Northwestern University’s Medill School of Journalism, she is also the Editorial Director of Banyan Global Family Business Advisors. She was named by Ashoka as one of the world’s most influential and inspiring women.